Donors are superheroes who honor their commitment to saving a life! Since 2008, the “Get in the Game. Save a Life.” program has produced over 800 life-saving heroes that have donated their bone marrow or peripheral blood stem cells to a patient in need.

Most view marrow donation as a selfless, honorable, time committing act that a donor makes to give a dying patient the second chance at life they desperately need. Donors look at it as a gift! They embrace the opportunity to be someone’s cure and walk away from the experience as if they are the lucky ones.
Meet a few of our amazing Get in the Game heroes: 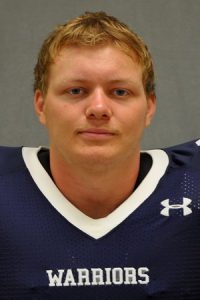 It’s so easy to sign up, following through wasn’t very difficult.”

When called upon to honor his commitment to be a stem cell donor, our hero Jon was in the midst of a busy time in his life. He had just finished finals, was preparing for graduation from Lycoming College and he was moving apartments. Yet, when he got the call he was a match, he said yes without hesitation. Jon knew that call meant he was saving someone’s life. “It’s just something you don’t think about. You are very rarely given the opportunity to save a life. So I A person and person posing for a picture Description automatically generated with low confidenceimagine when the opportunity does arise, you would take it. And I was very happy to do that.” 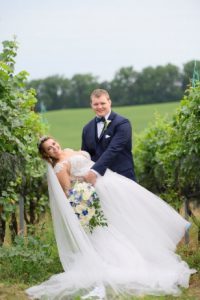 A star defensive lineman on the Lycoming College Football Team, Jon was physically and mentally prepared for his donation procedure. He took a series of injections for a week prior to the procedure, which he recalls was extremely fast. “Once I was hooked up, they pumped it out in about an hour.” Jon graduated with a degree in biology from Lycoming in 2017. He and his wife Samantha live in the Knoxville, Tennessee area where Jon works at an environmental remediation company. When Jon is not saving lives, he enjoys fishing and hunting.

“It’s good to look back at these opportunities and look back at the good. I think it inspires others to do the same. And that is good enough for me. If I can inspire other people to sign up and to donate, anything to create the same result would be great!”

Holiday gifts come in all kinds of packages. In late December, 2020 our hero Nick gave a someone he didn’t even know a gift like no other, a second chance at life. “It’s definitely cool. It’s a great feeling knowing that I did something like that. I don’t think it has really fully hit me yet.”

Nick joined the Be The Match Registry® his freshman year at Lycoming College during a Get In The Game drive his football team was hosting. A record-holding wide receiver on the Lycoming Football team, Nick helped to recruit others to register during the drives. At that time, Nick said he didn’t know too much about bone marrow transplants, but he knew “if I ever got picked, I knew I was going to have the surgery, that that was the route I had to go, I kind of had a gut feeling.” Turns out, he was right. Five years after joining the Be The Match Registry, Nick donated bone marrow via an aspiration procedure for a 71-year old man in need of a life-saving transplant.

Nick and his girlfriend drove from his home in Pennsylvania to DC for the bone marrow aspiration procedure. Nick said the surgery was rather quick, about 2 hours. While some donors go home right after the surgery, Nick took a little longer to recover and spent the night in the hospital, returning to Pennsylvania the next day. “There are people out there who are battling cancer every day. It takes me a drive to DC, a surgery and I am back home a day later-that’s all it takes. I would do it 10 more times if I had to.”

Heroes don’t always wear capes, they wear football helmets too! In the middle of a world-wide pandemic, a ray of hope named Tim Rafter gave the ultimate gift to a 72 year-old woman in need. Tim gave her a second chance at life!

An Ursinus College 2017 graduate and football player, Tim joined the Be The Match donor registry his freshman year during the football team’s annual Get In The Game (GITG) drive. Coach Pete Gallagher’s team has been hosting GITG drives for 12 years and he has seen 12 individuals honor their commitment and go on to donate. When asked why he loves the GITG program he responded, “It gives the staff the ability to teach the players the importance about giving back and being a part of something bigger than yourself, being part of a community and supporting others. GITG gives the players a sense of being able to go out into the Ursinus community, talk about the importance of the program and rally the whole community in support of GITG.” 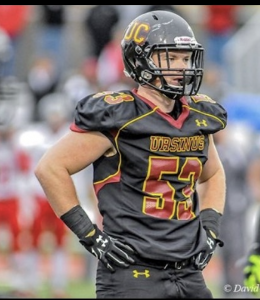 When Tim swabbed, he never thought he would be called to donate, let alone during a pandemic. The odds of being a match for someone is 1 in 430. His teammate donated, so Tim knew if he received “the call” from Be The Match that he wouldn’t hesitate to donate. But he did have some questions regarding his safety donating and travel. Once he was assured of his safety, the decision was easy. The date was set and his Mom took him to a Northern Virginia collection site. They spent the night before at his cousin’s house and the following morning Tim underwent the 5- hour stem cell procedure. Feeling fine after the procedure, they drove home the same day to his home in Pennsylvania.

A football coach at his high school Alma Mater, St. Joe’s Prep, Tim didn’t miss any work due to the stay-at-home order. He learned how easy it is to help people and knew if the shoe was on the other foot how much he would appreciate someone helping him or his family. “Donating is just a nice thing to do that goes a long way for someone else.”

Martin Flatley, a former TCNJ football player, who joined the bone marrow registry in 2015 at a “Get in the Game” drive during his senior year.  “Truly, I was overwhelmed to be able to participate in something like that.  Just the idea of matching with someone was such a marvel really”.  When Martin received the call in 2016 that he was a match for a woman battling Acute Myeloid Leukemia, the decision to donate was never a question – he was ready to save a life!

“I’ve always felt that it was our duty as citizens to help those who cannot help themselves. Most of us are privileged to walk around every day happy and healthy, so when the bell rang to participate and help someone out I didn’t hesitate.”  Martin underwent the 5-hour stem cell procedure having no idea of the impact his “gift” would have on his recipient.   On March 7th, Martin was able to finally meet his recipient and her 6 year old son in person at the ATBMF 9th Annual Bash.  “We’ve discussed that we’ve felt like we are already family, but after now seeing them in person, we know that we will be a family for the rest of our lives.”

Jared was a happy college student, playing football as a fullback for West Chester University. When his coach, Bill Zwaan, committed to host a “Get in the Game, Save a Life” marrow donor registry drive, Jared swabbed the inside of his cheek and officially joined the Be the Match Registry®. He didn’t think much of it once it was over.

Then Jared got the call that changed his life forever. He was a match! Jared saw the opportunity as two-fold; not only could he help save someone’s life, but he would get the opportunity to share his story with the public in hopes of inspiring others to register. Jared says his donation experience has changed his thoughts on everything, “It opens up your world.” Jared’s donation has made his recipient Sigitas appreciate every day he wakes up explaining, “There is beauty in everything. You can feel your loved ones, you can feel your child… everything is beautiful around us.”

The odds of being a marrow donor aren’t as slim as one might assume, but the chance of having two donors from the same family, however; is rare! Meet Matt and John. Two brothers from the University of Rhode Island football team, both are Get in the Game lifesaving heroes!

Matt saved the life of a 42 year old man with a form of lymphoma. His response when he found out he was a perfect match, “Let’s go!” Honored with the unofficial award for donating enough stem cells for not just one, but two transplants in a four hour time period, Matt didn’t hold that title for long. Matt explains, “It was the highest count they had ever seen….until my brother.” As competitive as the brothers are, this was a title Matt wasn’t upset to loose. His younger brother John, was identified a few years later and gladly followed in his big brother’s footsteps.

Saving the life of an infant suffering from a rare immune disorder took some time to set in a Western Illinios University linebacker named Jordan. “It really hasn’t hit me yet…I feel like I am just doing what I should do,” Veloz said. “But there are times I stop and think, ‘Wow, it is all in my hands.”

Jordan, like many donors, hopes that people are inspired to become a donor themselves once they hear about his donation journey.   “You never know when you or someone you know will need help, and if you get a chance to help someone else, why wouldn’t you?”

“I was blessed with the opportunity to donate,” Matthew said, realizing that there are many people on the Be the Match Registry who have never been contacted to donate. Described as a giving, humble, and personable young man, Matt donated his bone marrow during a two-hour procedure where they extracted marrow from his hip bones. “The important thing to remember is, more and more people are getting diseases like cancer and leukemia every day, which means we need more and more donors to make a difference, to save their lives,” Matt explains. “That is why when you have the chance to change someone’s life, you need to step up to the plate.”

Our donors are our HEROS. Meet Lex Lauletta, former Dickinson College football player, now an actor.  When Lex was a freshman at Dickinson College, he joined the Be The Match Registry at a Get In the Game drive. His football coach at the time encouraged all of his players to sign up. In 2017, Lex received a call from Be The Match that he was a potential match for a patient in need. At first, he was nervous about donating, but he knew that this was bigger than himself, and wanted to honor the commitment he made in 2014. Lex donated blood stem cells in the summer of 2017. When asked what he would say to other people considering joining he said, “Do it! You have people supporting you along the way and are helping someone other than yourself.”